Mississippi Moonshine Politics: How Bootleggers and the Law Kept a Dry State Soaked

I'm pleased to announce that my new book, Mississippi Moonshine Politics, the story of state prohibition in Mississippi, will be released in March! Although the book will retail for $19.99, I'm offering signed copies for pre-order at $16 each, plus $4 for mailing costs. If you are interested in reserving a copy of the book, please message me for more details through the Facebook page I've set up for the book. A link to the page is included below.

The Battle of the Bottle 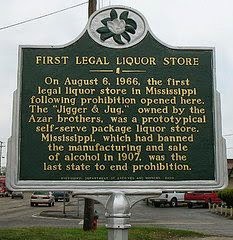 August 6, 1966 was an infamous day in Greenville, Mississippi, as it was in the State of Mississippi. As the historic marker pictured above states, the "Jigger and Jug," owned by the Azar Brothers, became the first legal liquor store in the state. Still in business today, the store is advertised in McRae's Business Directory as a "specialty" retail store that sells liquor.

It is difficult for many people my age to remember that manufacturing and selling liquor was illegal in Mississippi for over half a century. But the fact that liquor was not legal in Mississippi did not prevent those who wanted to buy a "bottle" from making a trip across the Mississippi River Bridge to a liquor store in Louisiana or from buying from local sources known as "bootleggers."

Throughout the prohibition years, local law enforcement officers and political and religious leaders alike waged very public wars against the sale of alcohol while often looking the other way when dealing with those who were selling it. Non-drinking private citizens, some with both money and influence, often took up the controversial cause. One of those private citizens was Hazel Brannon Smith, a newspaper editor who owned the Lexington (MS) Advertiser. Mrs. Smith's frank and revealing editorials in the 1940's eventually led to the arrests of a number of Holmes County bootleggers.

The illegal sale of liquor, however, continued until the law was changed in the mid-sixties. When the new local option law became effective on July 1, 1966, Mississippi entered a new era: it became the last state to end prohibition.

Blogger's note: Be sure to watch for my upcoming book, Mississippi Moonshine Politics: How Bootleggers and the Law Kept A Dry State Soaked (The History Press), scheduled for release in early 2015.
Posted by Janice Tracy at Friday, December 05, 2014 1 comment: 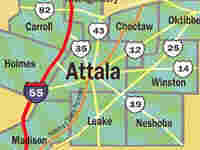 If you have roots in or connections to Kosciusko, Mississippi, or Attala County, you may want to know about a new book of historical photographs, compiled and just released by Thomas Craft, a local photographer, and the Kosciusko/Attala Historical Society. The books are $20 each, if picked up, and $23 if they are purchased through the mail. Also, the books can be ordered directly from the Historical Society and from the Kosciusko Chamber of Commerce (KADC), or they may be purchased through the Attala County Library in Kosciusko. For those who prefer to order over the phone, please contact the KADC at 662.289.2981, or the Attala County Library at 662.289.5141. Proceeds from book sales will go to the Attala Historical Society. I'm sure you will want to purchase your copy soon. As we all know, a picture is worth 1,000 words, something that is especially true with historical photographs!

New Book about State Prohibition in Mississippi in the Works

Although I don't have a title yet for my new book about state prohibition in Mississippi, I'm well into researching and writing about Mississippi's "liquor issues" that spanned almost six decades. The anticipated release date for the book, published by the History Press, is Spring 2015. Mississippi's own prohibition law was passed in 1908, a little over a decade before the Eighteenth Amendment was ratified on January 16, 1919. In fact, Mississippi was the first state to ratify the amendment. Ironically, however, many considered the Magnolia State to be the "wettest state in the country" until the state's lawmakers passed a local option law in 1966 during the early administration of Governor Paul B. Johnson, Jr. This will be my second book published by the History Press of Charleston, SC, and I'm pleased to be associated with such a fantastic publishing company. Although the History Press is a UK-based company, it has had a Canadian location and a U.S. location in Charleston, SC. Recently, Arcadia Publishing purchased the U.S. portion of the History Press. Just in case you aren't familiar with Arcadia Publishing, the photographic history books about various places throughout the country, including the recently released Yazoo, by John E. Ellzey, long-time reference librarian at the Ricks Memorial Library in Yazoo City, are part of the company's Images of America series. Since the History Press is retaining its name, my new book will still be published with the History Press imprint. I'm so happy be associated with the largest publishers of regional history in the country (and maybe the world!).  And I hope you will follow the progress of my new book about state prohibition here and on Twitter, until I can set up a Facebook page with its official title. In the meantime, maybe you will want to read my earlier book, The Juke Joint King of the Mississippi Hills: The Raucous Reign of Tillman Branch, set in Holmes County, Mississippi. You can find it in a bookstore near you and online at www.amazon.com, www.barnesandnoble.com, www.booksamillion.com, and on other websites.
Posted by Janice Tracy at Monday, August 11, 2014 No comments:

Well, its been over two months since I posted here...and it's good to be back. I have a good excuse, however, since I've been working on a new book project about state prohibition in Mississippi, due to be published in Spring 2015. The project is going well, and I hope to post more information here, as soon as the book's title is announced. So stay tuned.

And it's especially good to tell you about a brand new history book, simply titled Yazoo, about to be released just 6 days from now. The book's author is none other than John E. Ellzey, who has been the reference librarian for the historic Ricks Memorial Library in Yazoo City, Mississippi, for 40 years. Published by Arcadia Publishing, the 128 page softcover book contains approximately 200 black and white images of people and places in Yazoo County, Mississippi, and will sell for $21.99. Just in case you aren't familiar with Arcadia Publishing, you are in for a historical treat. I'm including a descriptive sentence found on the company's website, stating Arcadia is "the leading local history publisher in the United States, with a catalog of more than 8,500 titles in print and hundreds of new titles released every years."

If you would like to read more about Yazoo, or about its author, click here to visit the publisher's website. Or if you prefer to contact the author directly, he can be reached by email at johnellzey@yazoo.lib.ms.us.

Last month, I spent some time in my home state of Mississippi during the initial tour of my book, The Juke Joint King of the Mississippi Hills: The Raucous Reign of Tillman Branch. During National Library Week, I signed books at several libraries in or near Holmes County, Mississippi, where Tillman Branch's club were located. One of the libraries hosting a book signing that week was B. S. Ricks Memorial Library in Yazoo City, Mississippi. John Ellzey and the library's friendly and helpful staff welcomed me, and the book signing went well. Although I grew up in Mississippi and was educated there, and had been to Yazoo City, I had never before seen the beautiful historic building that houses the library's wonderful collection of books. I feel honored to have had the opportunity to sign my book within the walls of this library.


The Yazoo City library's history is a long and interesting one, beginning in 1838, according to its website, when it "was chartered by the Mississippi Legislature to provide public library service to Yazoo County." The current building, opened in 1901, was funded by Mrs. Fannie Ricks, a local philanthropist, who named the library in honor of her late husband, General B.S. Ricks. Located on North Main Street in Yazoo City, Mississippi, the home of country humorist, Jerry Clower, the fascinating and beautiful building was added to the National Register of Historical Places in 1975.

According to the s nomination form, "the Ricks Memorial Library is a noteworthy example of the Beaux Arts Classicism fashionable at the beginning of the twentieth century. While the building is not large, the use of Edwardian proportion and classical ornament combine to give it a pronounced monumentality. Standing on a concrete foundation, the library is constructed of hydraulic pressed brick with terra-cotta trim and is covered by a tin roof. Its composition is dominated by a central, two-story pavilion.... Sheltering the entrance is a single-story, semi-circular portico of paired Tuscan columns of Indiana stone....Use of the semicircle, of which the portico is the most conspicuous example, also appears in the skillfully detailed arches above the windows and the door opening....Other details include panels placed in the.....areas beneath the windows, which are double hung with one-over-one glazing." 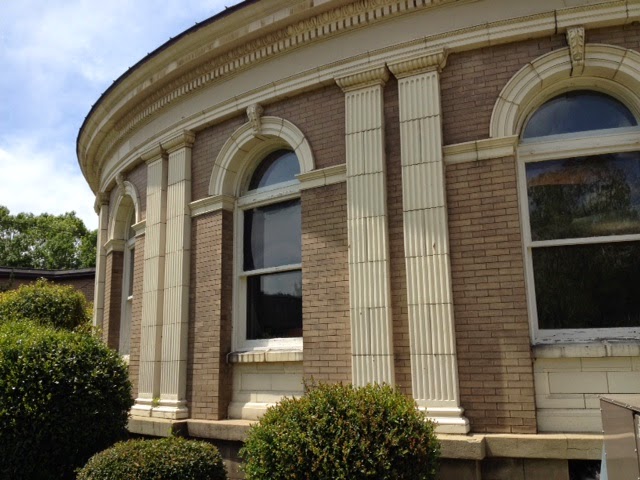 The building's exterior is beautiful and architecturally exceptional in design, and its portico and arched windows remind me of the long ago design of Moorish palaces. In addition to the library's rounded walls of numerous arched windows that allow natural light inside the library's main reading area, the unique building boasts a number of other outstanding features. One of these features is the elegant and gilded barrel-shaped ceiling inside the entranceway. 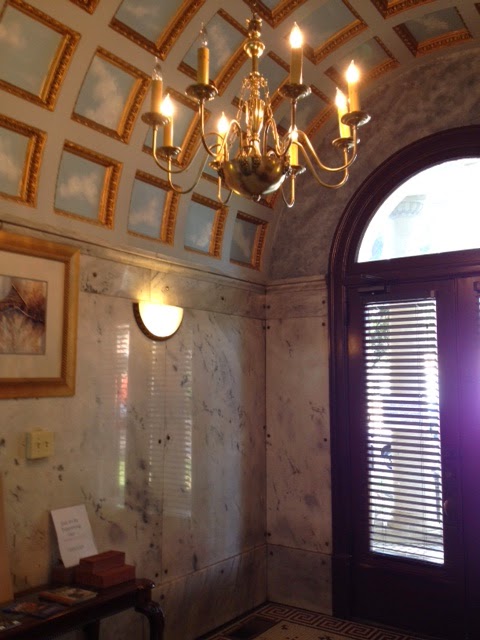 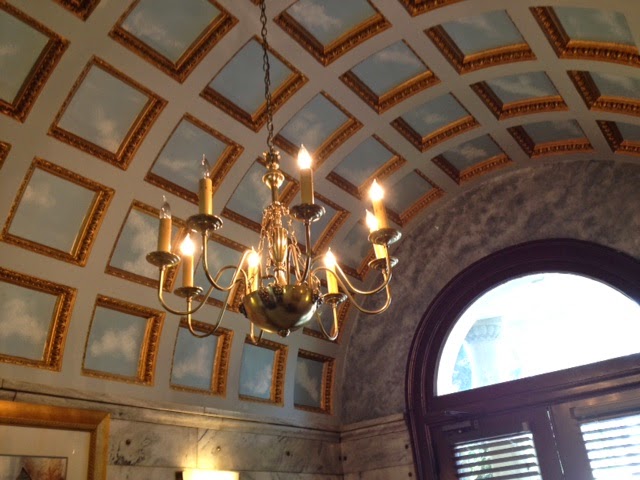 A closer look at the gilded ceiling of the library's grand entranceway. Each picture frame type square includes a blue and white cloud scene that gives the illusion of sky overhead.

My book signing inside this grand old building went very well. Several people who attended shared stories about growing up in Mississippi during the time of Tillman Branch's clubs in Holmes County nearby. And I left Yazoo City with some fond memories of my own -- of time spent with new readers of my book in this exquisite old building.

At this point, I have several thousand serious DNA matches. No, they are not all close matches, but if I examine the family trees closely enough, the link is usually evident. But there are a few surnames that keep showing up in my matches that just don't compute. For instance, the surnames of Cox, Manning, and Wilson appear in numerous family trees as ancestors of individuals who share my DNA. But I don't have a clue, at least not at this point, about my familial relationship with these ancestors. One of the ongoing problems with evaluating these "cousin" matches resulting from Ancestry's DNA tests is that so many of the individuals with whom I match don't have much family information posted on the site for review. However, one thing is for certain, if the cousin matches keep arriving by the dozens, as they have since my test results arrived, I may indeed match up with all 1,011,001 of my relatives! 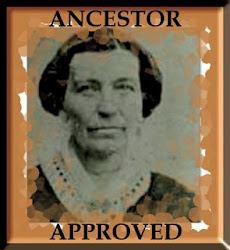 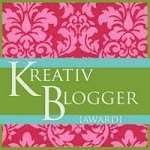